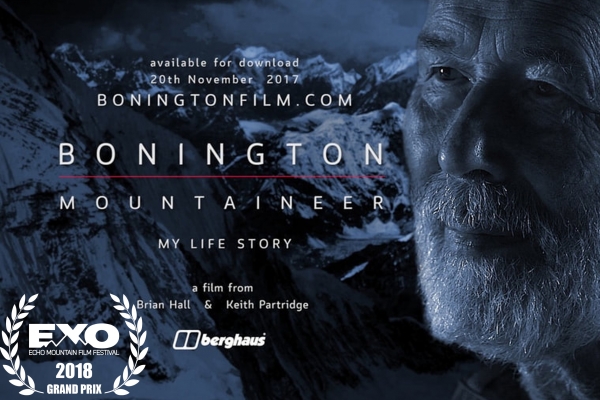 A film that portrays the mountaineering spirit, enthusiasm, life and memories of one great mountaineer. Included in the film narrative are his personal photos, interviews and archive material. This film is full with emotion that in a picturesque way tells us about the character of the British Mountaineer Sir Chris Bonington, who although throughout his life has lost a lot - still keeps a clear thought and untameably urge for adventure and life. Not only this is a pure personal story - at the same time this is a historical record for a living legend, whose mountaineering odyssey starts from his very first climbs in the Alps, all the way to the climbs that he is doing as an 80-year-old man.

The story in Yugen, which is a film debut by the American ecologist Rafael Pease, is not only given through the personal prism, but it is a story that affects us all and it addresses the whole planet. The author has decided to unite his own biggest passions: ecology and snowboarding and to make one unbelievable travel through which he tries to remind the humanity that we are all in some way connected and that each move that we make - reflects on a planetary level. Through mountaineering, this film gives a philosophical prism, which in this case, reviews the individual gestures in a broader context and looks for the consequences - not only locally, but also globally.

The short stop animation by the Spanish artist Ignasi Lopez Fabregas, is exceptionally original story full with humor. This is an odyssey about two top notch mountaineers, who have found their own authentic way to show that even when you face difficulties while climbing the most steep vertical faces - you can find a way how to enjoy yourself.

This film reflects one unique experience, that it is very close to this festivalís motto: the echo in the mountains. Here, the sport and the art become one. We can look at this as a phenomenon: achieving a goal and creating music, live on 4000m. This confirms that it is possible to accomplish any idea - strong enough. Looking at the art, the most beautiful art pieces arise from seemingly impossible and yet in the end, achieved goals, that fascinate us.