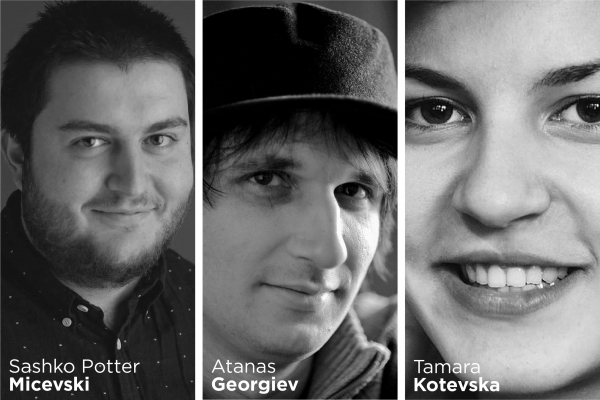 Sashko Potter Micevski is a freelance filmmaker, born in Shtip on 28th May 1990.  In 2008 he starts his studies on the Film and TV editing course taught by prof. Dimitar Grbevski on the Faculty of Dramatic Arts in Skopje. His graduation documentary film (Extra)terrestrial Lee caught the audience and media attention and its popularity is still growing.After graduating, Sashko gains experience as a sound editor at the studio Audiohaus in Skopje. As a sound editor he has worked on numerous short and feature length films including the Piano Room, To the Hilt, Heroi, Three days in September, Agnus Dei etc. His career gets another direction after he starts his master studies on the Sound Design for Film and TV course on the prestigious National Film and Television School in the UK (few years in row ranged as the best international school in the world according to Hollywood Reporter). During his studies he works on few successful shorts The Proposal (premiered at Encounters Short Film festival) and A Song for Our Fathers (premiered at London Short Film Festival). As a part of his graduation process is his work as a sound designer on the animated film Tete-a-Tete which premiered at the biggest animation festival in the world in Annecy, France. The film was also shortlisted for the student Oscars in LA and for BAFTA LA. After his graduation he works as an freelance filmmaker both in England and Macedonia. Some of his latest post-production work are few projects for BBC (feature length documentary Handmade in Hull, documentary series Danceworks) and Guardian and the edit for the first season of the TV Series Prespav. This year he was part of the sound design teams as an assistant sound editor on the blockbusters Mowgli, Sherlock Gnomes и Fantastic Beasts 2: The Crimes of Grindelwald. Currently he is in post production phase on his second auteur documentary We are All going to Die and cutting season 3 of the TV series Prespav.

Atanas Georgiev / Producer / Editor / Director, Born in 1977 in Skopje, Macedonia, in what was at that time Yugoslavia. He is owner of Trice Films and Film Trick production companies from Macedonia, a subsidiary and association of fx3x.com
He makes his living by editing feature films, but then he spends his money on documentaries he believes in. His debut Cash & Marry, which cost him many years of hard work and pulmonary embolism, has won many international awards and recognition. Filmography: Honeyland 2019, Documentary, 85 min (producer / editor), Avec l’amour 2017, documentary 67 min (producer/ editor), Cash & Marry 2009, documentary 76 min (co-producer / director).

Tamara Kotevska is born on 9th of August, 1993, in Prilep, Macedonia. She wins the “BEST BALKAN FILM” international film award in official competition on Tirana International Documentary Film Festival with the graduation documentary “STUDANTS” (49’), supported by  “Filmtrick” and the “Faculty of Dramatic Arts- Skopje” (as writer and director). With the first professional environmental documentary “lake of apples”(27’), supported by UNDP (as writer and co-director) she gets the awards: “Festival National Nature Namur” in France- “Prix de l'environnement”(2017), “Honorable mention” on “INNSBRUCK FILM FESTIVAL” in Austria (2017), “PERSEUS” award on “T-Festival” in Brno, Czech Republic(2017). She is currently working on the documentary in progress “Honeyland” (as co-writer and  co-director). “Honeyland” won the “Cinelink Work in Progress”: “TRT award” of 30.000 euros from the National Turkish Television for the documentary in progress on  “Sarajevo film festival” (2017) and got the support (50.000 euros) of the Macedonian Agency of Film (2017) for debuting long documentary.