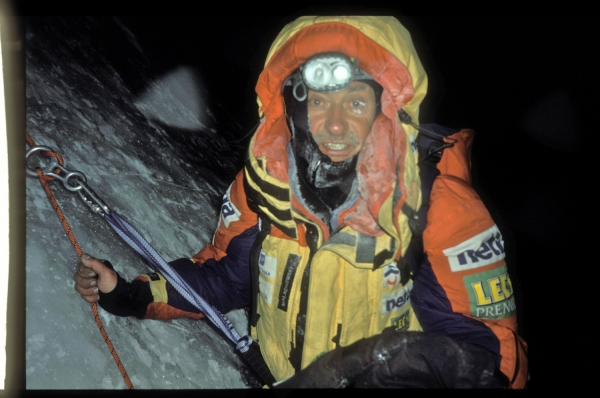 Presentation by Krzysztof Wielicki: „MY CHOICE”

Born in 1950, in Poland,  Krzysztof Wielicki is one of the most outstanding alpinists who has been climbing in the Himalayas! He is the fifth man to climb all fourteen eight-thousanders, but more importantly in a very strong style: climbing in winter, solo, via new routes, climbing in one day to the top and some of them couple of times. We present you the list of his first climbs on these 14 8000s:
Mount Everest (1980) – normal route from Nepal in winter with Leszek Cichy. First ever winter ascent of a summit of a 8000 meter peak.
Broad Peak (1984) – normal route, the first ever ascent on a summit of 8000 meter peak in one day (16 hours up, 6 hours down), solo.
Manaslu (1984) – new route on South-South-East Face (with Alexander Lwow)
Kangchenjunga (1986) – normal route, first winter ascent (with Jerzy Kukuczka).
Makalu (1986) – normal route, alpine style (with Marcel Ruedi).
Lhotse (1988 ) – normal route, first winter ascent, solo.
Dhaulagiri (1990) – new route on the East Face, solo (16 hours up to the top)
Annapurna (1991) – by British route on South Face (with Bogdan Stefko)
Manaslu (1992) – normal route (with Marco Bianchi and Christian Kuntner)
Сho Oyu (1993) – by Polish route (with Marco Bianchi)
Shisha Pangma (1993) – new route on the South Face, solo, in 24 hours
Gasherbrum II (1995) – normal route, solo
Gasherbrum I (1995) – Japanese route, alpine style, 30 hours from base to summit (with Carlos Carsolio, Ed Viesturs, Jacek Berbeka)
K2 (1996) – Japanese route (with Marco Bianchi and Christian Kuntner)
Nanga Parbat (1996) – Kinshofer route, solo.

We would like to express our gratitude to the Embassy of the Republic of Poland, for their continuous support and one more opportunity for us to enjoy and get inspired by the accomplishments of the strong Polish alpine climbers and the influential Polish mountain culture!